I consider myself to be pretty well immersed the the ‘indie pattern’ world. I sew more patterns from small pattern makers, than I do from the big names like Burda, Vogue and Simplicity. Yes, they’re more expensive, but you really get what you pay for. That is, well planned patterns which have been properly tested, excellent instructions and illustrations, and more often than not, beautiful tactile packaging. Yes, these things count for a lot.

However, thus far, I have been totally missing out on the vast array of pattern offerings from French patterns producers. I’ve followed Republique du Chiffon on Instagram for some time, and when they brought out a beautiful new range of patterns recently, I decided to dip my toe in the Channel and brush up my language skills!

The patterns I fell head over heels for are the Combishort Yvonne, the Robe Yolande, and the Chemise Petula. To you and me, that’s a playsuit, a dress, and a blouse! I swiftly ordered all three! Now, to those of you with more limited French than me, RDC do translate their patterns into English, but the translated versions are released later. My French is limited, but ‘ok’ and I just decided it would add to the fun. Ultimately, I was so pleased that I was able to understand pretty much everything, and made notes on all the sewing terms for future use. If anyone was particularly interested I would be happy to upload a printable document to assist, although I imagine somebody somewhere may already have done this. 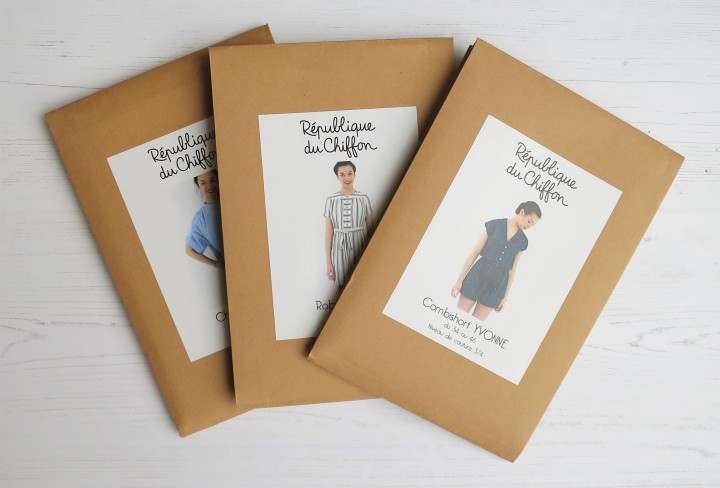 The patterns took a few weeks to arrive (when I ordered them it was a ‘pre-order’) and happened to coincide with my ‘un-selfish’ me-made-may pledge. That is, I had pledged to sew some clothes for my lovely daughter. She had chosen this watermelon viscose and asked for a dress. I had even taken the time to draft something simple with an elasticated waist. However, this is a girl who LOVES a collar! When I saw Yvonne I decided it was just perfect, but as she wanted a dress I have replaced the shorts with a skirt. I notice on Instagram (search #yvonnepattern) that this is quite a popular way to go. Personally, I don’t have the thighs for a cute little playsuit! My daughter does, and I’m sure that version will follow in due course.

My daughter has just turned 12 (this in fact became a birthday dress), and it’s a little tricky to find good sewing patterns for this age group. Children’s patterns generally stop at age 12, and it won’t be long before she will fit the smallest size in adult patterns. The smallest size in the RDC patterns is very petite, and my daughter perfectly fit the chest, waist and hip measurements.

The only problem was that the bodice was far too long in the body, but it was fairly simple to alter. I took 6cms off the bodice, distributed between the arm height, and the lower bodice. It wasn’t just a case of taking 6cms from one place as the balance would be off, and the armholes would have been far to big for her. I also raised the break point of the collar (the point where it turns away from the button stand) as I could tell it would be far too low-cut.

Something not to miss if you are sewing an RDC pattern (possibly this goes for other French brands) – the seam allowance is not included in the pattern.  Les marges de couture ne sont pas incluses sur le patron. I don’t mind this at all as I trace all my patterns, and in fact it makes life easier if you are making any alterations.

Cue much measuring and tracing! 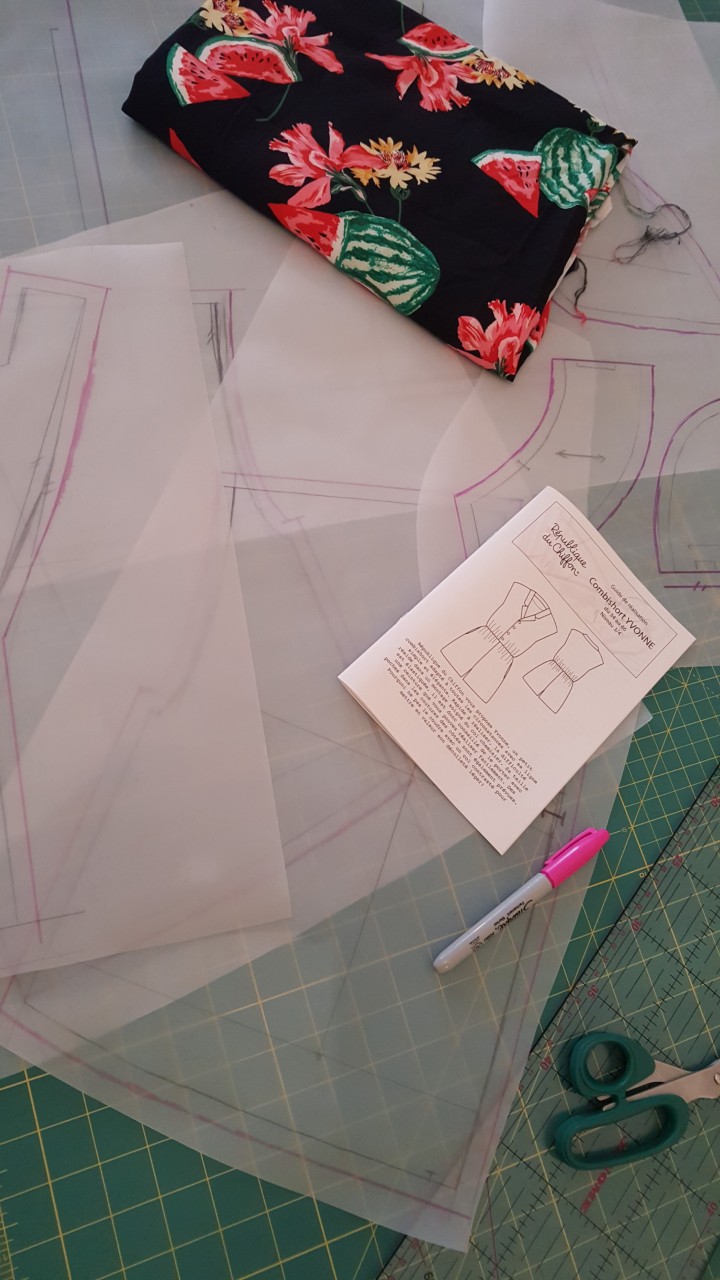 I was surprised that the pattern doesn’t call for any interfacing (thermocollant) at all. I have never come across this on a garment with a collar and button-stand and I chose to interface the front facing and under collar, particularly as I used a lightweight viscose fabric.

The instruction booklet is thorough and the illustrations are very clear. The trickiest part of the whole process is fitting the collar and trying to ‘clip’ to release the fabric while it’s still under the presser foot!

The illustration is perfect: you sew the front edge and catch the short edge of the collar, but then you snip to the marking to enable you to swing the collar into line with the back neck. The process is not quite so simple as you end up with a few layers to manipulate. I then found it impossible to align the collar with the back neck while everything was on the sewing machine. I chose to take it out and sew the opposite side, then going back to ‘join’ the back section. 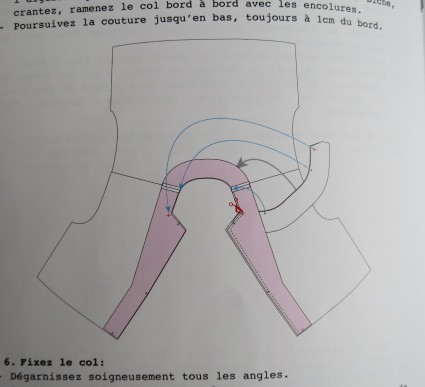 Illustration from the instruction booklet 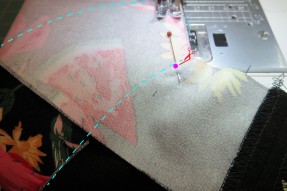 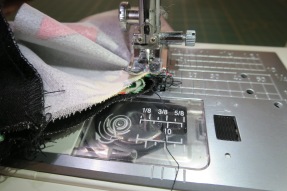 Still, it worked and my collar turned out nicely! 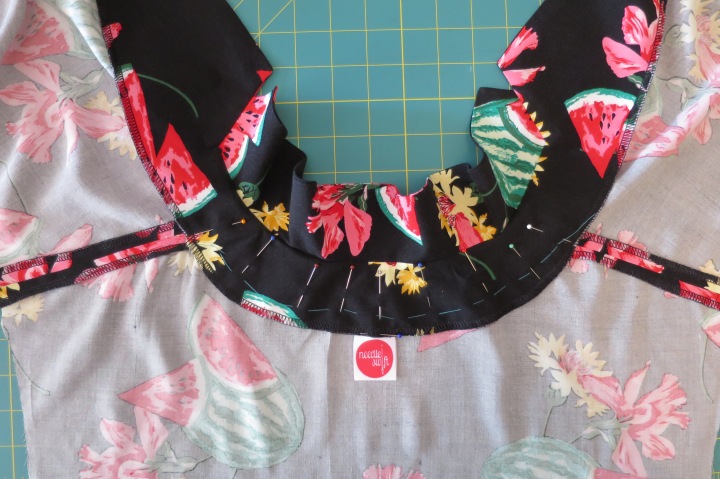 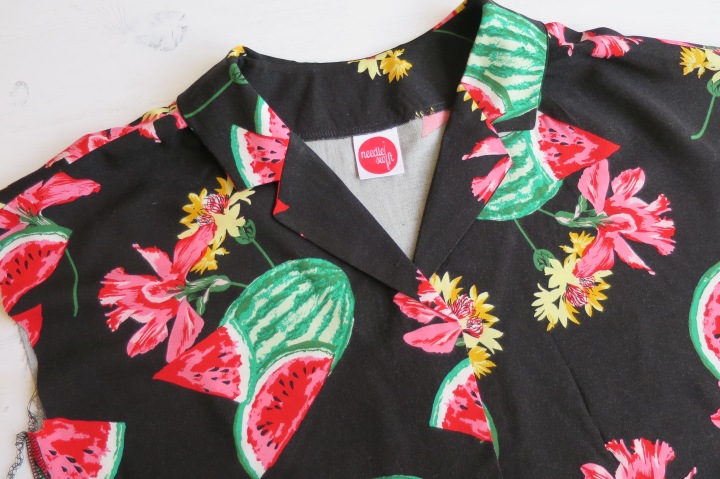 The only part that had me scratching my head for a little while, was how you are advised to insert the elastic at the waist. The illustrations dried up at the end and it took me a while to decipher the subtleties of what the pattern was explaining. Due to the mention of ‘quartering’ the waistline and the elastic, I think we are supposed to sew the elastic to the seam allowance. At first I had assumed there was some kind of casing.

This worked fine, although I always find with this method that the elastic stretches as you sew, and the waist ended up too loose on my daughter the first time around. As I was unpicking the first attempt I got really nit-picky with the fit and decided the bodice was too low. My simple fix was to attach the skirt a further 2cms away from the ‘correct’ seam of the bodice. This in face meant that I could have made a nice casing for the elastic, but it was ‘birthday eve’ so I took the simple route! 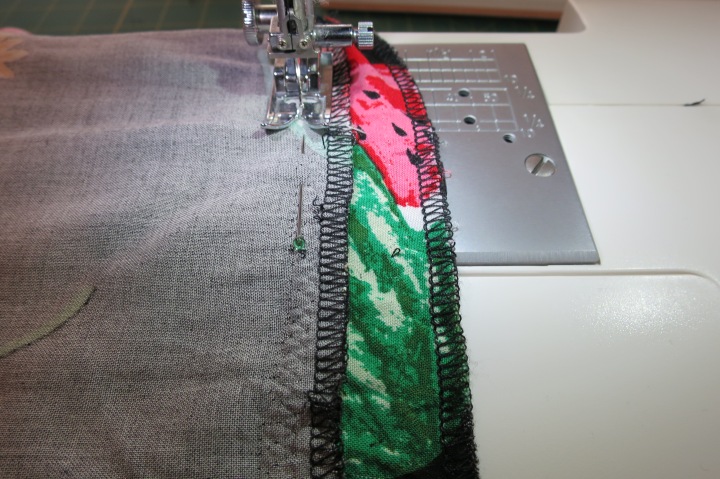 A final note, is that although the pattern image shows a waist tie, this is not included in the pattern, or therefore the fabric allowance. So, plan ahead if you want to make one. The instructions do cover, at the very end, how you can make a simple tie belt. I think it would be a nice touch, but I would also want to add some kind of loops at the sides of the waist to hold the belt.

I had great fun making this pattern, and it was a joy to give it to my daughter, who absolutely loves it. I hope I’ll get around to making the intended playsuit version for her, and a skirt version for myself. Too much to sew, too little time! Here are the results of our little photo shoot in the sunshine. 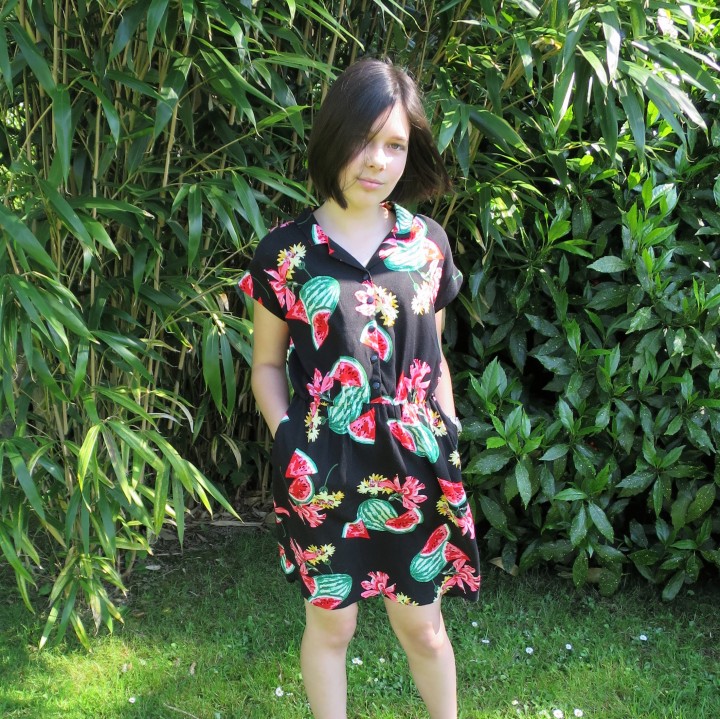 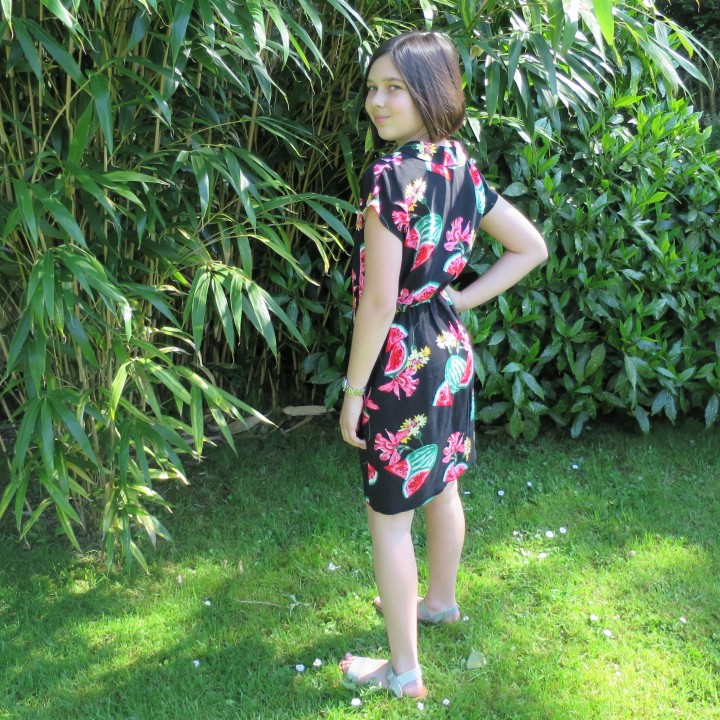 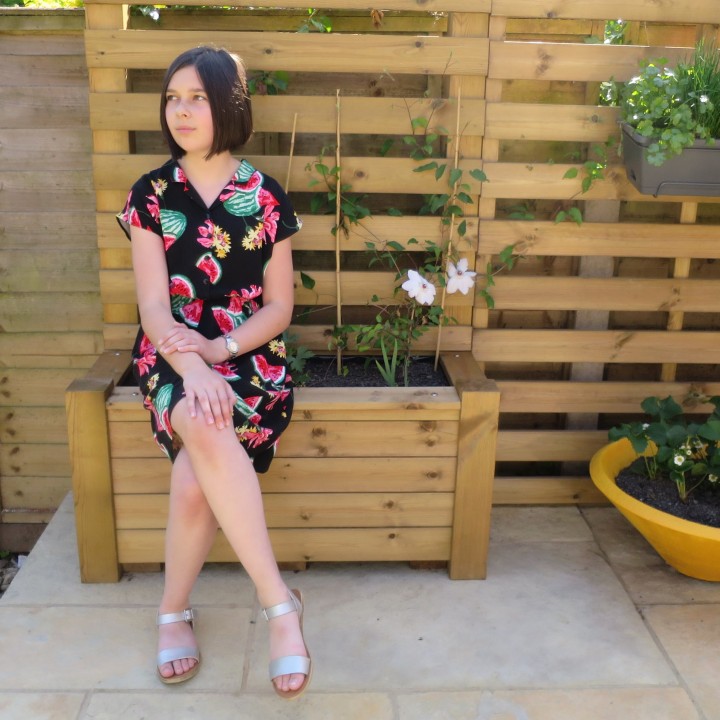