After teaching Stitch Club for over a year, I thought it might be nice to have a little ‘show and tell’ here on the blog. It’s been such a rewarding experience for me, and hopefully for the children too! As the new term began last week I felt proud of them, and also of myself, as I reflected on how much their sewing skills have improved.

I set up Stitch Club as an after school class at my children’s primary school after chatting to another parent who was running an art club in a similar way. I’ve been teaching my own daughter to sew since the age of 7; I could see how much enjoyment she was gaining from sewing, and also my own pleasure at sharing the skills which I so wish I’d learned at a younger age. I didn’t start sewing until my early 20s and am entirely self-taught through books, patterns and good old trial-and-error.

There are eight students in Stitch Club, plus my daughter who, even at the tender age of 10, is a great help and always happy to stop her own sewing to help her friends. The evidence of the success of the club is that the students keep coming back. For the first 18 months I had one group of students. It’s only this term as some of the girls left primary school, that I’ve taken on some new students from the waiting list.

I try to create a good balance in Stitch Club of hand sewing and machine sewing. The easiest way to do this, is to design projects which begin with hand sewing, and are then completed by assembly on the sewing machines. Because the children work at different rates this usually means that they are ready for the sewing machines at different times. This works well because I take all my equipment to the school each week and usually only take a couple of machines. 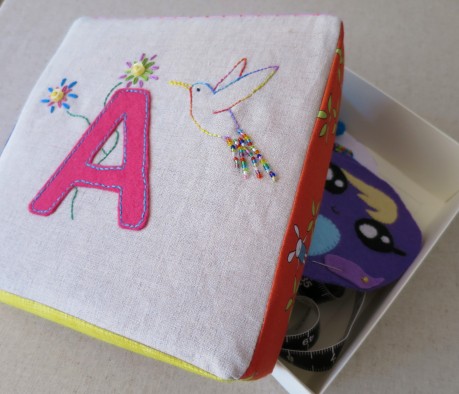 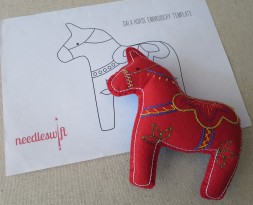 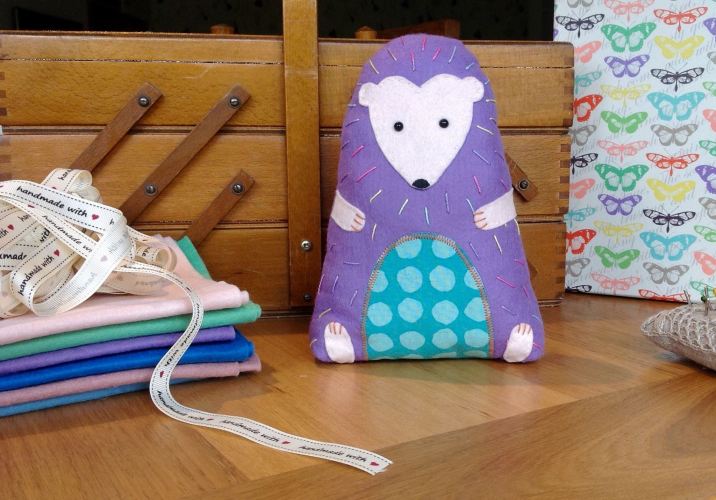 There are always a few speedy sewers among the children. As long as they are producing neat work this is no problem. If they are rushing and doing ‘lazy’ stitching then I encourage them to take a little more pride in their work! We live in an age where everything is so immediate and so often rushed. Sometimes I show the children my finished sample and I’m thrilled that they are so excited by it, but then they rush to complete their own because they want it ‘right now’! I have pointed out many times that sewing isn’t like shopping; it’s as much about enjoying the creative process as cherishing the object they have made.

For those who are genuinely a little more adept and whizz through a project, I always make sure I have some smaller projects ready to go. Often, this is felt sewing, and I design a simple A4 sheet that I can print out complete with pattern and instructions. This is their introduction to using a pattern and following written instructions independently, giving me time to help others.

One of the most popular ‘mini-projects’ has been making felt doughnuts!

Click here to print your very own doughnut pattern!

I use Illustration software to design patterns and templates which serve as a guide for the children, or a starting point to create their own designs. One of the favourite projects last year was for the children to design their own ‘kawaii’ character. I provided a simple shaped body template which they used to create their characters. They then learned to trace each element to make pattern pieces. Along with lots of print-outs sourced online, and a huge stack of colourful felt and stuffing, this enabled them to have great fun sewing their own characters.  Click here to print a simple ‘kawaii’ template

Another popular project was tote bag making. The children chose an applique design and cut and prepared their own fabrics. The applique was sewn by hand before assembling the bag on the sewing machines. We used a lightweight denim and the bags were lined with calico. Lining a bag is a mysterious procedure to the uninitiated, involving leaving a gap in the lining to turn the bag out – a fantastic moment of excitement at the very end of this project! 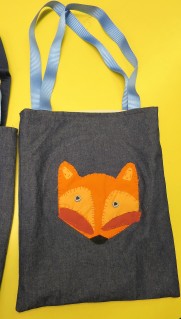 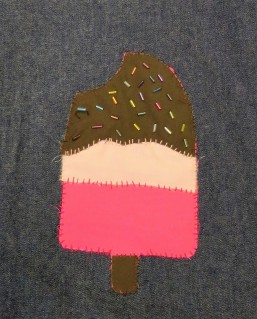 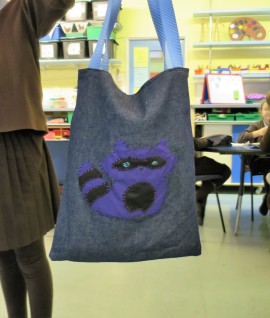 I spend a lot of time preparing projects. I run Stitch Club as a business and I want the parents to consider this money well spent, and for the children to get as much out of our sessions as possible. I aim high because I believe that the students will feel a great sense of pride and achievement in making something that they really love. Projects tend to be designed to take around 4-6 weekly sessions. If a project seems like a chore, then it’s no fun, so I try to gauge the mood of the girls and break things up with a one-off session completing a simple project to provide a break from the more involved work.

This term, the children are making fun circular cushions with elephant applique, embroidery, and pompom trim. The first image shows my sample, and as you can see from the next photo, the girls are really rising to the challenge! Finally there is a ‘behind the scenes’ look at my preparations, this time involving a handmade stencil to create the elephants. 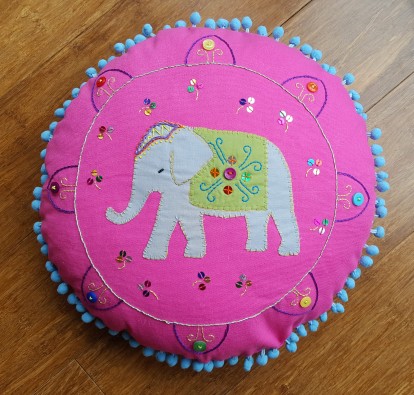 The lastest project – my sample

At this week’s session I had a wonderful moment of calm, where I looked at nine girls who had all chosen to squeeze around one table. They were all working on their elephants and chatting excitedly. It does get a little boisterous at times, but I always tell them I’m more than happy for them to chat, as long as they are still sewing. After all, this is the sewers version of ‘knit and natter’!

There has only ever been one project (phew!) which was a challenge too far for many of the students. This was a cross-stitch project which involved far too much concentration to be able to chat at the same time! However, some of the children had the determination to stick with this project: they produced beautiful high-level sewing along with big smiles at recognising their own achievements.

Fox cross-stitch pillow made by a Stitch Club student

You may have noticed the occasional reference to ‘the girls’: while it is true that all of my students are girls, Stitch Club is open to boys if they wish to join. Evidence below that boys like sewing too – you just have to find the right projects. My eight year old son working on his Velociraptor cross stitch (the larger scale elephants taught the basic method), and proudly showing off a fleecy sleeping bag for his favourite toys. His current work-in-progress is a denim waist pouch for his Nerf bullets! 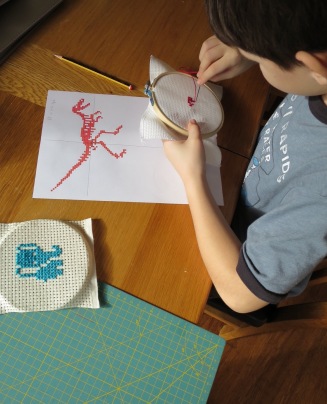 I hope you’ve enjoyed reading about Stitch Club. Writing this has been as much for me as for my readers. It’s lovely to reflect on the fun that we’ve had working on these projects. Perhaps you’d like to try something similar at your own school or just with your children, in which case I hope this has inspired you to start planning.  Here are a few pointers to get you started: 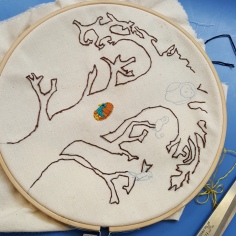 Embroidery designed by a student

In the first 18 months we’ve tried out embroidery; cross-stitch; applique; patchwork and quilting. The children have made tote bags, cushions, zipped pouches, felt toys, Santa hats and Christmas decorations, lavender bags, and even simple denim skirts. We have some fun projects ahead and hopefully my little stitchers will all have caught the sewing bug by the time they leave primary school next year!